AN INTRODUCTION TO ICES
It's hot in New York City in the summer.  People sweat.  People wear less clothes.  People get thirsty.  And, there might not be a more thirst-quenching treat than ices.  Some people buy shaved ice from vendors on street corners.  Others head to one of the many ice cream trucks pulled up along the curb.  Many, however, purchase ices at grocery stores where they are cheaper, planning ahead for a hot summer evening when they want that special treat.

THE PRODUCT
I was in Duane Reade when I saw the following box: 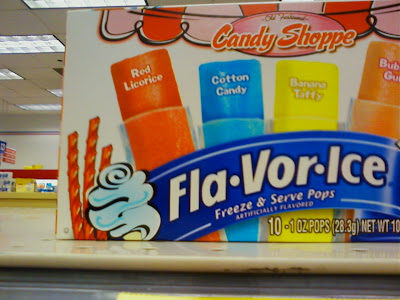 Red Licorice.  Cotton Candy.  Banana Taffy.  Bubble Gum.  The worst lineup of ices flavors that I'd ever seen in my entire life.  No wonder the box was on sale for $1.
I bought the box and decided to conduct a TASTE TEST.
THE TEAM
I needed a team of experts to assess the intricate flavors of the ices accurately.  There was myself, of course. 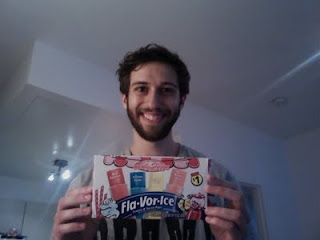 Then, I recruited my friend, Danny D., an experienced cook with an exquisite pallet. 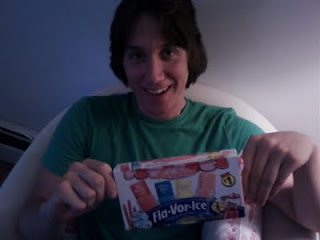 For the third member of our panel, I wanted someone with very different tastes.  Samantha, my girlfriend's dog, was the obvious choice. 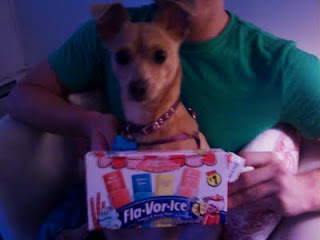 (*NOTE: We took these pictures after we ate all the ices.  That's the reason why I look like a serial killer and Danny D. looks like the star of a A Clockwork Orange remake.)


THE TASTE TEST
*Each flavor was rated from 1-5 using the following scale:
5- Excellent
4- Good
3- Average
2- Below Average
1- Awful 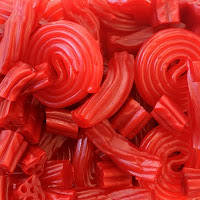 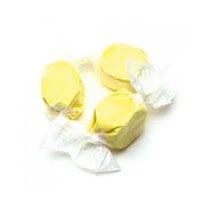 They couldn't even make it just banana ices; they had to make it banana taffy.  It tasted exactly how a rotten banana covered in sugar would taste.  Exactly.  Danny D. hated banana taffy even worse than me, commenting that even the color of the ices was unappealing (putrid yellow).  "No one should eat this ever," he concluded.  Samantha wasn't quite so thrilled about the banana taffy either.
Ratings:
JTG: 0.5
DD.: 0
Samantha: 3
AVERAGE: 1.17
BUBBLEGUM

I had to spit this one out-- I didn't want to, I had to.  It was so sweet and so…disgusting.  Who even eats bubblegum anymore?  Is bubblegum flavor so popular that it's worth making an ices flavor for it?  We're not in the 1940s anymore!  Danny D. didn't think this one was quite as bad as the banana taffy, but agreed that it was "still intolerable."  Samantha had a sneezing attack after eating her ices.  Maybe she was allergic to whatever vile chemicals were in it.
Ratings:
JTG: 0
DD.: 0.5
Samantha: 2
AVERAGE:  0.83
OVERALL:
BEST
JTG: Red Licorice
DD.: Red Licorice
Samantha: Cotton Candy
WORST
JTG: Bubblegum
DD.: Banana Taffy
Samantha: Bubblegum
MOST ACCURATE
JTG: Red Licorice
DD.: Cotton Candy
Samantha: Cannot talk, so we're not sure
CONCLUSION
The ices were far worse than I thought they'd be (and I thought they would be bad).  I assumed at least one of the flavors would be okay, but I was very wrong.  Get your ices elsewhere and stick with the classics, cherry, blueberry, and lemon.
Posted by Jeff at 12:00 AM