This afternoon, a magnitude 5.8 earthquake caused much of the East Coast to rumble.  The ground shook, buildings toppled, New York City sank into the ocean (just like Atlantis did over fifty years ago).  Basically, it was exactly like a scene from The Day After Tomorrow or 2012 (two movies that you should never, ever watch).  By some miracle, I was able to survive the earthquake. 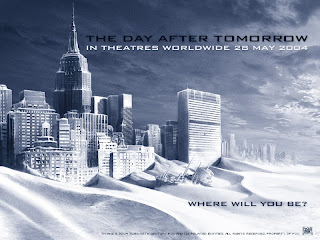 We actually watched this movie in my high school science class.  Way to go, SBHS!
At the time of what is now being called "The Great Quake of Twenty-Eleven," I was high above the earth doing some part time work as a window washer.  Suddenly, the bosun's chair I was sitting on started to swing wildly.  The building I'd been working on shook violently and its freshly cleaned windows exploded-- sending shards of flying glass everywhere.  I felt a jolt and looked up in horror as my rope snapped and I fell towards the ground at lightning-fast speed.  Luckily, I landed on an old mattress that someone had left out on the side of the road. 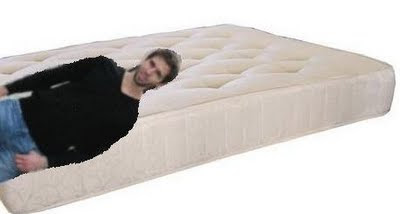 Convenient.
The earth was still shaking and I could tell that the city was about to sink to the bottom of the ocean, so I ran to a small airfield.  I got into a plane and flew away just in the nick of time. 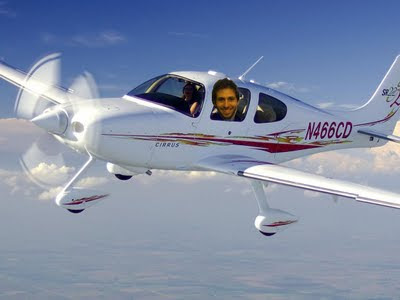 There's some woman in the plane with me, but I don't know who she is!
The plane was nearly out of fuel and I had to land in New Jersey.  Still in shock, I got out of the plane and looked around.  The state was in shambles. 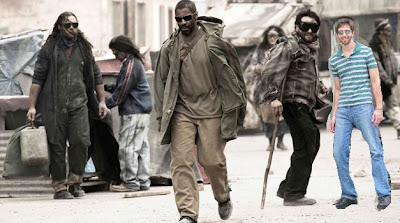 Some of the other survivors were mean.  Also, they dressed in bleak colors.
I was so lucky to have survived.  Now, I wander down the coast, hunting for other survivors.  I will have to help rebuild this great nation. 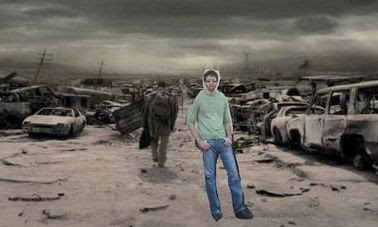 In a moment, I will turn and follow my new friend, Denzel Washington.
Actually, that story is not true.  In reality, I was in the bathroom brushing my teeth when the earthquake hit.  (I had been having one of those days when your throat just feels blah and your breath stinks.)  I did not feel the earthquake, possibly because the bathroom is reinforced with very strong wood.  I left the bathroom, and took Samantha for a walk (Samantha is a dog). 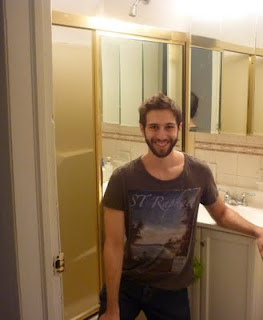 This is where I was when The Great Quake of Twenty-Eleven hit.
The world outside of the apartment looked completely normal.  My only observation was that it was a little hot out, but still a pretty nice day overall (and that has nothing to do with an earthquake).  When we got back to the apartment, though, my girlfriend told me she had felt The Great Quake (she did not call it this, though).  It was all over the news, so I knew that she wasn't trying to play a trick on me. 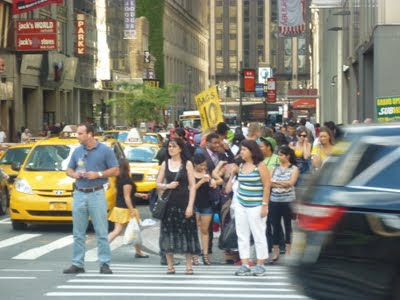 I can see a man with a sign in the distance rallying survivors...oh wait, he's just selling bags.
The news, and some people in New York City, made a very big deal about the earthquake.  "My building got evacuated for about an hour," said a man in a red striped shirt on the train.  "I wasn't there, but my co-workers said the building was swaying.  That's crazy for this area."  Another person I know had a chair fall over in her house.  Just Jennifer (one of our writers) also lived through the earthquake.  She was training for her bakery job when the lights began the shake (she is simple-minded and "special", so this was exciting to her).

Special Jenn.
Overall, I do not think the earthquake was a very big deal and would like for the news to stop reporting on it and for people to stop talking about it.  I am also bitter because I did not feel the earthquake.
Posted by Jeff at 9:41 PM