Oscars are boing, not funny, just plain awful.
The Oscars this year: BAD.
Anne Hathaway, who starred in such hits this year as Valentine's Day and Love and Other Drugs (she's on a role!), stunk.  James Franco, who garnered a nomination for 127 Hours (which he did deserve), was worse.  They were awkward, not at all funny, and the entire time it was pretty clear that James Franco did not want to be there.  I can't blame him, I wouldn't want to be there either if I had to read any of those crappy jokes written by Bruce Vilanch.  You pretty much knew this thing was going to be a stinker when Anne Hathaway pointed out her mom in the audience.  Anne Hathaway's Mom: "Stand up straight."  Awkward laughter.  Not funny.
Then there was Kirk Douglas.  My first question is, What is Kirk Douglas even doing there?  He's 94 years old, hasn't been in anything in years, and it's hard to make out every fourth word that he says.  According to Bailey Johnson of CBS News, Kirk Douglas "stole the show while presenting the award for best supporting actress."  Bailey, who seems to have loved Douglas, shouldn't have had quite so many shots within the show's first thirty minutes.  Kirk Douglas was creepy; it was uncomfortable when he was flirting with Anne Hathaway, not funny.  And, worst of all, Douglas, who has never won an Oscar, made an award that these actresses had to deliver phenomenal performances to be nominated for, all about him and his presentation.  He made them sit in the audience and wait while he made stupid jokes and flirted.  I can't imagine what poor fourteen year old Hailee Steinfeld was thinking, waiting to find out if she won an Oscar while a senile old man waved around a cane and an envelope on stage. 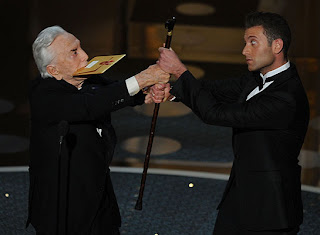 Get this man off the stage.
There were no good songs this year.  They never should've let us hear great songs like "Lose Yourself" from 8 Mile, "Falling Slowly" from Once, or "It's Hard Out Here for a Pimp" from Hustle & Flow, before letting us listen to the very average songs nominated this year.  They made the same sort of mistake once again when they had Billy Crystal take the stage just to remind us how poorly Hathaway and Franco were doing.
That Auto Tone video with Twilight and Harry Potter...  What was that?  That's the kind of video that someone sends me a link to that I click and then quickly close because it sucks.  I'd rather watch Baby Monkey Going Backwards on a Pig, or that cute puppy whistling.
What was up with those little kids in colorful T-shirts singing "Somewhere Over the Rainbow" at the end of the awards?  It was the type of thing parents are forced to sit through at elementary school shows.  It had nothing to do with the Oscars.  They have all the winners come out and stand with these little singing children?  Bizarre. 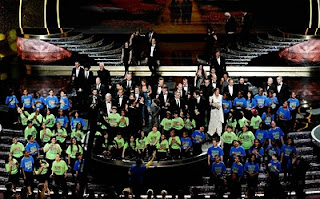 There were also no upsets (never fun) and no exciting speeches (Melissa Leo said BLEEP, who cares?).
Bottom Line: 3 hours and 15 minutes of boring.
Posted by Jeff at 5:00 PM