It is commonly believed that the Zombie Apocalypse will be started by either a virus, government experiment gone wrong, or meteorite with alien parasites.  However, a new discovery made by some bug nerds in Brazil, has given us a more likely culprit. 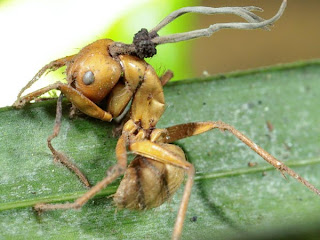 I know what you're thinking, but you're wrong: The Zombie Apocalypse will NOT be caused by ants with antlers (though why is it that deer have antlers and ants don't have antlers, dumb english language).

What's on this (dead) ant's head?... It's a DEADLY FUNGUS EXPLODING OUT OF ITS BRAIN!

Entomologists have discovered four different fungus species that are capable of zombifying ants.  All four infect the ant, gain control of its brain, and use the ant to spread fungi to other ants.  In the end, the mind-controlled ant is marched away from the others where the fungi picks out a good place for the ant to die-- a place where the fungi can grow large and spread all of its spores. 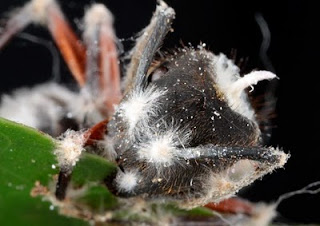 I do not like ants.  In fact, my least favorite animal is "the bug" (my favorite is the capuchin monkey).  However, ants are by far not the worst bug.

Ants definitely do not deserve to be zombified.

Imagine this scenario: Someone wanders into a cave in some remote part of the world, a cave where the human zombie fungus has lied dormant for thousands of years.  The person leaves the cave and, now controlled by fungus, heads back to civilization and infects others.  Soon, we're living in a world where millions of people are mind-controlled zombies.  The bodies of the infected are covered in evil fungus spores and once they touch you, or once you go near a dead zombie, BAM!  you're infected and the fungus takes over your brain. 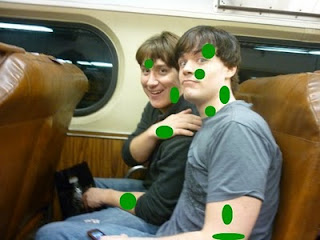 These guys have been infected by zombifying fungus!

Within a year, 99.9% of the population is infected and you're one of the only survivors.  You team up with some really tough guys, a few incredibly hot models, and me. 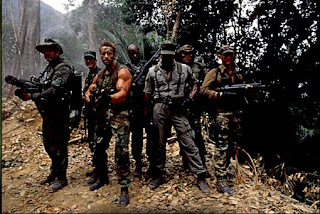 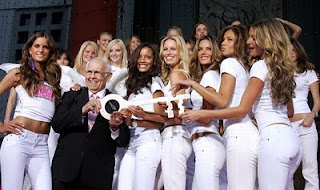 The old guy might be zombified, but the others are still human. 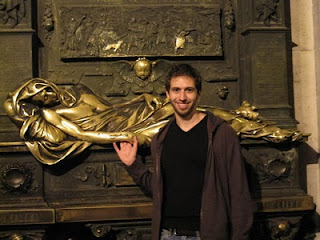 We do our best, but we're being killed off one by one.  We end up wandering in the jungle when, suddenly and luckily, we find a mysterious spaceship.  We get in-- the ship works.  With the other remaining survivors, you and I blast off and settle on a distant world (we find one that can support human life).  Life as we knew it is over, but at least the zombie apocalypse is behind us.  It's time to begin a new human civilization on this alien planet.

This is what might happen if there is a human version of the zombie ant fungus.
Posted by Jeff at 5:33 PM