2014 Super Bowl Logo Revealed! A Look at Old SB Logos and a Review of the New One!

The logo for the 2014 Super Bowl, which will be played at MetLife Stadium (home of the Jets & Giants), was revealed today.  Before we get to our review of the logo, let's take a look back at some Super Bowl logos of seasons past.

THE ORIGINAL: SUPER BOWL I

FLASHBACK: 1967
MORRIS: What in tarnation is this Super Bowl thing I keep hearing about?
HARRY: I don't know.
MORRIS: Oh, look, here's a picture of the logo.  Seems like it's the "First World Championship Game".
HARRY: What an informative logo!
MORRIS: It sure is!  I would love to watch the game, but I have just been drafted into the Vietnam War.
Since the bland Super Bowl I logo (which is really more of a sentence), the NFL has used a variety of different types of logos.  Let's take a look at a few!
BOWLING ALLEY: Super Bowl is a chain of popular bowling alleys.

"I've been to Super Bowl II in New Brunswick.  I can't wait to go to Super Bowl VII in Detroit.  I'm going to bowl a strike!"
DINERS: The Super Bowl Diner chain is known for its famous tomato soup.  You can get a bowl of it for just $1.95, but the delicious, filling "super bowl" will cost you $4.50!

Jackpot, bitches!
WACKY ROMAN NUMERALS: Roman numerals can be so boring.  For these two years, logo designers took trying to make them look cooler too far.

Really?
LOCATION LOGOS: At some point, the NFL ran out of fonts, so they decided to incorporate the Super Bowl host city/venue into the logo.  See if you can guess where these Super Bowls were played based on the images.

Looks like Super Bowl XXI had something to do with jesters.
Here's the logo for Super Bowl XLVIII that'll be played in 2014: 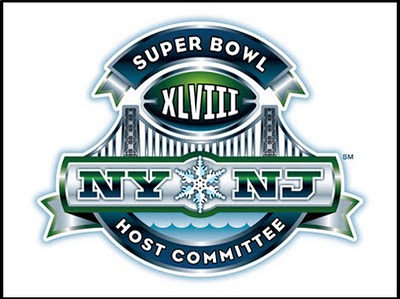 My first thought upon seeing this logo was that a lot of people got paid a lot of money to spend several months designing it and this is what they came up with.
We've got the George Washington Bridge.  Because when I think of the best landmark in NY/NJ, I don't think of the Empire State Building or Statue of Liberty, I think of the GW Bridge.  A picture of the New York City skyline would've also been nice, but not as nice as the image of a bridge that's packed with traffic during rush hour.
Next, we have the green New York Jets color font.  Of course, I'm a fan of this.  There's some blue in the logo (for the Giants I presume), but it's more of a pale blue, not really NY Giants blue.  The gray/silver color is also bleak which makes the green pop out even more.
My favorite thing, of course, is the big snowflake at the center of the logo.  Do Roger Goodell and the rest of the NFL really think that sitting outside in February in New York City in the freezing cold is fun?  Do they realize that real football fans don't go to the Super Bowl-- just rich people and celebrities-- these aren't people who want to deal with the cold.  February is the coldest month in NYC, averaging a high of 32 degrees Fahrenheit.  Also, it's the snowiest month.
I hope the Jets are in Super Bowl XLVIII (XLVIII-- that's an awful lot of letters) to represent their green color in the logo.  I also hope it's a blizzard because that would be fun to watch on TV.
I think I made a better logo with LunaPic on the internet. 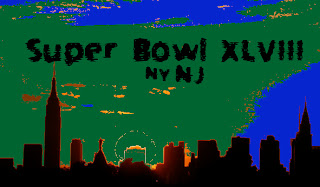 It's sort of a graffiti style...that's cool.
Alright, so my logo isn't very good.  But I did it in 15 minutes and I also didn't try very hard.  Maybe it's time to call it quits with the "location in the logo" logos.  We can go back to the bowling logos.  In hindsight, those don't look all that bad.
Posted by Jeff at 2:51 PM