It was a hot, sunny day in Central New Jersey.  I'd planned to go running in preparation for a race (a rematch!) with my little sister's friend, Mimi, but I knew that the heat would make me super dehydrated and I might faint.  So instead, I decided to go to Quakerbridge Mall to buy some new clothes.  It didn't go well. 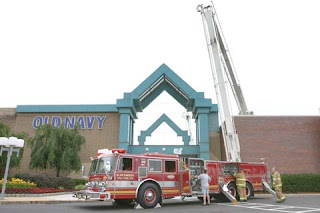 I have no idea why this fire truck was at Quakerbridge Mall.  It wasn't there when I went.

I wanted to purchase the following items:
*Dress pants
*Collared shirts
*A grey blazer (and maybe a brown one, too)

First, I went to MACY'S.  The store, like the rest of the mall, was very empty.  (It was sort of like Dawn of the Dead, but without zombies, and I was looking for clothes, not struggling to survive.)  I went to the dress clothes section of the store to find a tailor, since I hadn't gotten a new sports jacket or collared shirts in a while and wanted to know my size.  There was no tailor.  They didn't have any good pants either.  Luckily, one of the best parts about a mall is that there are lots of stores in the same building. 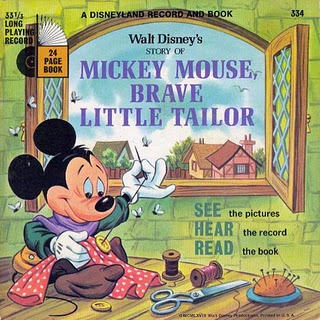 He can't be a tailor because he's a mouse.

The second store I went to was THE GAP.  There weren't any dress shirts, or blazers that caught my eye, but they did have some nice tailored khaki pants (straight fit).  I found a pair my size (32" Waist, 34" Leg) and tried them on.  Strangely, the pants were too large around the waist.  I tried on a pair of 31x34's, but these were too small.  How strange!  Still unsuccessful, I headed to JC PENNY. 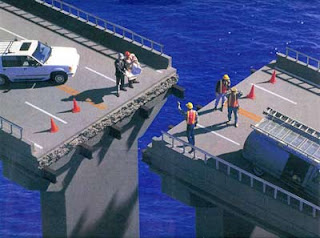 When I did a Google search for "The Gap," this picture came up.

Just like with Macy's, there was no tailor at JC PENNY.  There were plenty of shirts and blazers, but I didn't want to get anything without knowing my exact size.  Also, none of them were so amazing that I just had to have them.  They did, however, have some nice pants.  But despite having hundreds of pairs of pants and tons of different styles, not one pair was my size.  This upset me greatly.

My pants size typically isn't so hard to find.  I am a tall, slim, healthy male.  I asked the Yahoo! Answers community: "What size pants would a male model wear?"  A man named "Steve S" responded that male models wear a 32 Waist X 34 Leg.  That's my size!  Someone who went only by the letter "G" told me to do an internet search for "male model measurements".  What a good idea!  Overall, I found that the average male model is from 5'11"- 6'1", and weighs between 145-165 pounds.  Although that may seem super skinny, it's actually a healthy weight.  Boxer Oscar De La Hoya is 5'10.5'' and about 155 pounds.  Wow, he's a lot trimmer than your average American, and he could (possibly) beat you up! 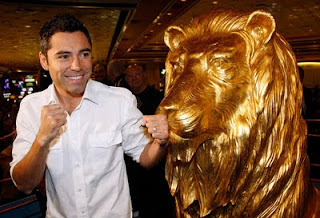 I am in the model range at 6'0" and 165 pounds.  If it's people my size who are showing off the pants (and Oscar De La Hoya), shouldn't I be able to find a pair the same size in the store! 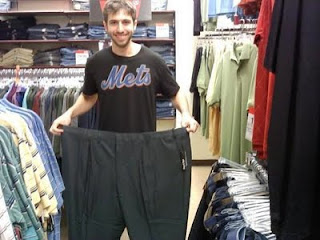 Stores also have lots of crap. 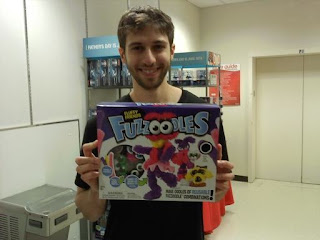 You can buy giant pants and Fuzzoodles at the mall.

I checked out SEARS before I left.  They had a pants chart that let you know what sizes they have in the store.  No 32 X 34.  I left the mall empty handed.

On the way home, I realized my mistake.  What was I doing looking for my style of clothes at Macy's?  At Sears?  At JC Penny?  I'm not an old person, I shouldn't be shopping there.  I need to shop at places in SoHo, like Uniqlo, where I've gotten things that fit me in the past.  That's where hip, cool people shop and I want to be hip and cool.

I don't think the day was a complete waste, though, because I learned a few new things.  Like if I want to have an easier time buying clothes in New Jersey, I need to gain 50 pounds.  Also, I can become a supermodel (or a boxer).  Most importantly, I learned that it's not the clothes that make the man, it's the man inside the clothes that make the man.  Or something like that.
Posted by Jeff at 5:13 PM