Well, the first week of March Madness is over and, if you're anything like me, you still have a perfect bracket. (My bracket.)

However, most of you reading this are probably not like me since most people-- except maybe my clones-- are not like me. (It is also debatable whether or not my clones are really people and whether they should have the right to vote. I do not care if they have the right to vote, but one day I will harvest their organs. Unless, of course, I am a clone and don't know it, in which case, I am against that.)

Anyways, luckily for all of you non-winners out there (I do not want to use a harsh word like "losers" and hurt anyone's feelings), Yahoo! and a bunch of other sports websites run "Second Chance" brackets where you pick the winners for the remaining games. Then, if you get them all right (and you'll likely need to win some tiebreakers too), you win $5,000. Sure, it's not the million bucks you'd have gotten for a perfect original bracket, but it'll have to do.

So how do you pick the winners. Personally, I use a system of complex mathematical algorithms that I've created along with some old, powerful voodoo that was taught to me by an old mystic I met in a little hut while journeying through the Amazon with only the clothes on my back and a canteen full of water.

Since you cannot use my prediction methods unless you want to pay my teaching fee (10,000 euros-- I only like to be paid in euros now), your best chance for success is to make your picks based upon team mascots. Mascots can be a very good indicator when it comes to who will win basketball games. They also favor heavily into the mystic's teachings, which revealed to me that "Bird Mascots" would do fantastic this year-- and *Boom* SEVEN bird mascot teams have made it to the Sweet Sixteen. Amazing.

Here are the mascot matchups for the Sweet Sixteen and who you should pick going forward. 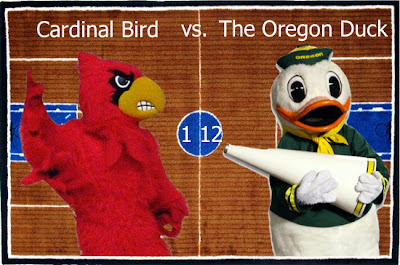 On one hand, we have a scary red cardinal. On the other, we have chubby Donald Duck wearing green instead of blue. This isn't Disney World, fool! Cardinal Bird looks like he's about to open up a can o' whoop ass on big duckie.
WINNER: Cardinal Bird 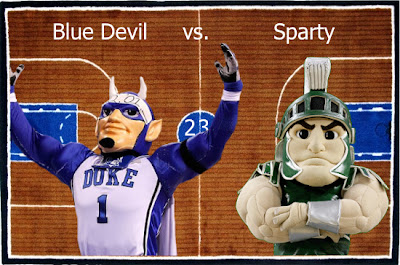 There are so many ways that you could make a Blue Devil mascot look cool and only exactly one way that you could make it look super lame. Duke has chosen the one super lame way. Fake biceps? A dumb plastic mask? If the real devil could see this he'd be ashamed. At least Sparty looks sorta cool. He's also about to go into 'roid rage any minute now.
WINNER: Sparty 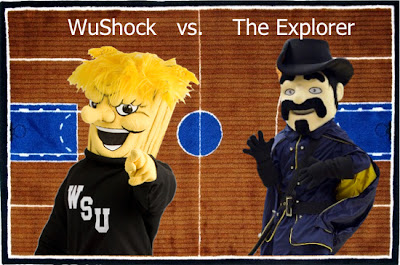 It is hard to make a mascot based off of wheat horrifying, but congratulations, Wichita State, you have done it. I always thought Withcita State's team name, the Shockers, had something to do with lightning. Boy, am I dumb. It is because long ago their students used to earn money by harvesting (aka shocking) wheat. Wow. The Explorer (great name) looks like a pervert muppet.
WINNER: WuShock 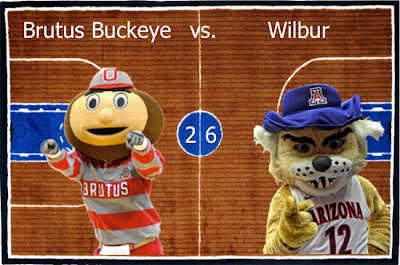 I hate Brutus Buckeye. I. Hate. Him. He is a giant nut-headed freak and it makes me nauseous just looking at him. On my list of creatures that I do not like, he is right at the bottom below the dog at the dog park who ate his own poop and then came over to me and tried to lick me. That is how low he is. He is the scum of the earth. That is why I am picking the hillbilly, trailer park wildcat to beat him.
WINNER: Wilbur 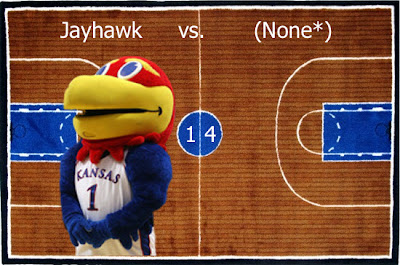 I hate schools that think they're too cool for a mascot. Look how sad Jayhawk is, he just wants some mascot competition. Michigan's nickname is the wolverines; why couldn't they come up with an awesome wolverine costume? Better yet, why not bring a live wolverine to every game? I hear they are friendly.
WINNER: Jayhawk 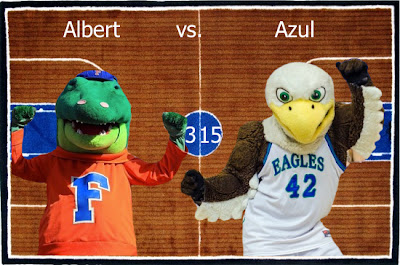 It's nice to see that Albert's been working out. Look at those guns. Seriously though, how old is that costume? Azul isn't much better, but at least he knows how to bust a move.
WINNER: Azul 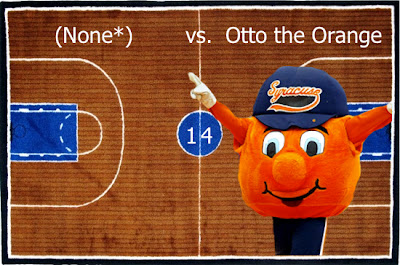 Let's be honest, even if Indiana had a mascot odds are it wouldn't beat a giant, smiling orange.
WINNER: Otto the Orange 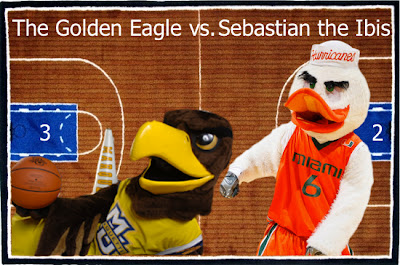 Apparently the Oregon Duck has a nasty uncle named Sebastian the Ibis. Look at the eyebrows on Sebastian-- they're great. But I think it's really that little sailor hat with the team name on it that ties the whole costume together. Or maybe that he has Yeti arms instead of duck wings. Or his blindingly orange jersey. He's just fantastic. The Golden Eagle is too plastic looking to compete with the spunk and character of Sebastian.
WINNER: Sebastian the Ibis

Using the winners from above, we can figure out who will win the entire tournament!

FINAL FOUR
WuShock over Sparty
Sebasitan the Ibis over Jayhawk

CHAMPIONSHIP
Sebastian the Ibis over WuShock

So there you have it-- take Miami and its so-awful-it's-got-to-be-good mascot, Sebastian the Ibis, over Witchita State's menacing WuShock, the scary bundle of wheat.
Posted by Jeff at 2:44 AM