Just kidding!  We all know that I don't know how to write books (or even how to read)!  However, I do know how you can make lots of money and win exciting prizes too!  It is by going on a game show! (Exclamation point overload in this paragraph.)

A long time ago (probably before you were born), game shows were very popular.  People used to sit around the TV with their families and watch The $10,000 Pyramid or Card Sharks.  Then, they would play board games and talk or play marbles or something.  (I am not sure what they would really do; this was before Facebook was invented.)

Today, we have reality TV where you have to sing or live on an island or dance or race around the world to win money.  There are still game shows that pop up on prime time TV every now and then (like Minute to Win it, hosted by that awful elf-man Guy Fieri or Million Dollar Money Drop), but they definitely aren't as popular as game shows were in decades past.

I decided to review/analyze some of the game shows that have been around for a while and are still on the magic box with little people trapped inside.  These shows are still churning out new episodes and, if you wanted, you could even apply to be on one of them!  Then you could tell me when your episode was going to be on and I could watch it and then tell everyone that someone I know was on the show!

Let's get down to business!  Time to review those game shows.

THE PRICE IS RIGHT
CBS 11am-12pm
When I was little, I used to love to watch this show.  But then our family dog, Maxx, decided that he didn't like all of the game show sounds and would bark whenever the show came on and basically ruined it for me.  (Now Maxx is 12 and has trouble hearing.) 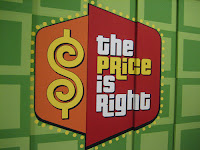 THE CONCEPT: Four contestants are presented with a prize and whoever comes closest to guessing its price gets to play a pricing game.  After three contestants play games, they take turns spinning a giant wheel with different dollar amounts on it and whoever is closest to a dollar gets to go on to the Showcase Showdown at the end of the show.  There, two contestants guess the value of a collection of prizes.  Closest without going over wins their showcase. GRADE: B+

ENTERTAINMENT VALUE: The show is one hour, which is too long, but at least the games are varied.  Some are easy-- like Plinko, while others-- like Lucky Seven, are pretty tough (and are dumb). GRADE: B

HOST: Bob Barker used to host this show and he was one of the greatest hosts of all time.  He also hated dogs and cats having sex.  ("Have your pets spayed or neutered.")  Current host Drew Carey has slimmed down a lot since his days on The Drew Carey Show.  In fact, many would go so far as to say that he's downright sexy.  (I am not such a person.)  As a host, Carey isn't bad, but he's nowhere near as good as Barker was. GRADE: B

ATTRACTIVE FEMALE MODELS?: YES. There are four of them: Rachel, Amber, Gwendolyn, and Manuela.

DIFFICULTY: EASY-MODERATE Some skill goes along with guessing the prices of things, but there's definitely a lot of luck because who really knows if that car is $18,393 or $18,394.  (No grade for this section since if a show is more or less difficult can be good or bad depending on your level of intelligence.)

PRIZES: Many people don't realize that you're taxed heavily on game show winnings.  So, if you win something you don't really want, you're still going to have to pay around 30% of its value in taxes to Uncle Sam (which, as the Ninja Turtles would say, is a bummer).

With that in mind, many of the prizes on this show you most likely won't want.  It's hard to win a car, but the cars that you can win aren't great.  On the episode I watched, some old woman had a chance to win an off-road vehicle.  One Showcase Showdown consisted of a brand new power boat and a trip to Minnesota where you get to stay on a houseboat.  If you are a boat lover, this is great, but if you are scared of the water, then this is a bad prize. GRADE: C-

OVERALL: A mildly entertaining show with a decent host, but mostly prizes that you don't really want. GRADE: B-

THE CONCEPT: Contestants, chosen from the audience, usually have to decide whether they want to keep a certain amount of money or take a box or a curtain instead.  Sometimes an unrevealed prize will be a "ZONK", aka a fake prize that's a piece of crap (not literally).  For example, a zonk could be bug candy or a "lemon car" (an actual zonk on the episode I just watched). GRADE: C-

CONTESTANTS: All of the contests are dressed in ridiculous costumes.  I feel sort of bad for them.  What happened in their lives that led them to this moment?  One woman was dressed as a bathtub. GRADE: C-

ENTERTAINMENT VALUE: Clocking in at one hour, the show is waaaaaayyyy too long.  When the big game at the end of each episode consists of a contestant simply picking one out of three curtains and getting whatever is behind it, it's not too entertaining. GRADE: C-


HOST: Wayne Brady sings, dances, and flirts with the ladies.  He also has an obnoxiousness level of 10.  A Level 10 Obnoxiousness Level-- that's unheard of! GRADE: D 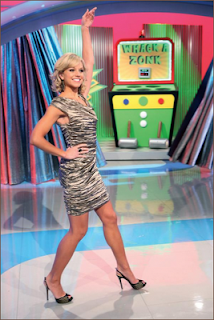 DIFFICULTY: EASY Basically 100% luck.  Unless you are mute, saying "I'll take the curtain," is not hard.

PRIZES: If you're chosen from the audience you're pretty much guaranteed to take home a small amount of cash (between $500-$1500) if you don't take any curtains or boxes or anything.  On the episode I watched, one woman won a hideous couch.  Someone else won two new bikes.  The best prize was a trip to Barbados, unless you want to pay taxes on a $15,000 Kia. GRADE: B-

OVERALL: If The Price is Right and a scary clown had a baby and the baby tried to give you an awful headache, then you would have this incarnation of Let's Make a Deal. GRADE: D

WHO WANTS TO BE A MILLIONAIRE?
ABC Late night

THE CONCEPT: Basically it's dumbed down Millionaire.  Same multiple choice questions, but now the first 10 questions are in a random order (concerning their difficulty and the amount of money they're worth).  Your first question could be super easy but worth $25,000.  After the first 10 questions, which range between $100-25K in winnings, the show goes into normal, old Millionaire format.  You get two Jump the Questions and one Ask the Audience.

CONTESTANTS: Not as intelligent as the contestants who were on the show when Regis was the host.  Boring people. GRADE: C-

ENTERTAINMENT VALUE: Despite the new format trying to switch it up, the show is pretty bland.  Contestants seem less than enthused and the host isn't as funny as she thinks she is. GRADE: C

HOST: Since Regis is now in TD Bank commercials and is old, Meredith Vieira is the show's host.  Vieira is pretty.  Pretty lame that is.  (ZING!  See what I did there?)  She loves to pretend contestants are wrong, but then (SHOCKER) she's really toying with them and they're right. GRADE: D

DIFFICULTY: MODERATE With the two jumps and the Ask the Audience, if you are reading this article (which means you can read), you can probably make it to the second stage of the game and bank yourself 40K or more.  If you're gonna win something on a game show, cash is the what you want.

OVERALL: I'd pass as far as watching the show goes, but if you get the opportunity to be a contestant, go for it. GRADE: C

THE CONCEPT: Your classic quiz show.  Three contestants answer questions from a variety of categories (often with witty names) that are worth different amounts of money.  Daily Doubles and Final Jeopardy spice things up (because nothing says spicy fun like Jeopardy). GRADE: B


CONTESTANTS: When Alex Trebek has the contestants tell their little intro after the show's first commercial,  they tell some story that inevitably makes them seem even weirder than they (probably) even are.  Once, one woman talked about how she ran over a family of ducks. That's someone I want to root for. GRADE: C

ENTERTAINMENT VALUE: The show goes by quickly.  Questions are varied.  If you like trivia, this is definitely the show to watch. GRADE: B+

HOST: Alex Trebek is always spot-on.  Even at 71, it's clear that he's still got it.  Well-spoken and intelligent (unlike that awful Wayne Brady). GRADE: A

DIFFICULTY: HARD Of all the shows mentioned in this article, Jeopardy is the only one where you've really got to be smart.  When I watch an episode, I like to say the answers that I know aloud so that the people watching it with me know that I am a genius.  This works even better if I am re-watching an episode that I've seen.

PRIZES: Whoever wins gets to keep all the money that they've earned.  No matter their cash totals, second and third place only get $1,000 and $2,000 respectively.  Considering the difficulty of the show, you'd expect contestants to get more. GRADE: C-

OVERALL: A game show that really challenges you with interesting trivia questions?  Answer: What is Jeopardy. GRADE: A-

THE CONCEPT: Three contestants spin a big wheel with different monetary amounts/prizes.  They then call out a letter in an attempt to solve a word puzzle.  Basically, it's Hangman.  Whoever wins gets to try to guess a final puzzle with a larger prize. GRADE: A

CONTESTANTS: Pretty varied.  They all smile a lot and clap when they spin the wheel. GRADE: B

ENTERTAINMENT VALUE: Anyone can play along with Wheel of Fortune.  It's fun to watch it with your friends and see who can solve the puzzles the fastest.  And by "fun" I mean it's something to do between 7:30 and 8pm on a weeknight if you are lame  And by "lame" I really mean awesome. GRADE: B+

HOST: Pat Sajak is that guy at a big family get-together or high school reunion who catches you in a conversation that you really don't want to be in.  He thinks he's hilarious, but in reality he is kind of a tool.  This show needs to upgrade its host.  I am available. GRADE: C-

ATTRACTIVE FEMALE MODELS?: Does Vanna White count even though she is actually a robot?
DIFFICULTY: EASY-MODERATE Being a great puzzle solver helps, but there's still a big luck element.  It's not called Wheel of Skill.

PRIZES: Every contestant keeps the money and prizes that they've earned.  At least one trip is won every episode and solving the final puzzle will net you at least 30K.  Wheel gives you the opportunity to win a lot of cash and it isn't too hard. GRADE: A


Well, I'm off to go apply to be on all of these game shows.  If they won't take me, I can always make easy $ by going on the next season of The Voice.  I'm told that I sing like an angel.
Posted by Jeff at 1:09 AM