If you follow the news, then you surely know that a man found $500,000 worth of rare coins in an abandoned storage unit he bid on and won for $1,100.  The auction was run by American Auctioneers, the company featured in A&E’s Storage Wars, a show in which obnoxious people bid on the lockers of other people who, for one reason or another, have failed to pay their storage fees.  (Go pay your storage fees, everyone!)  Unfortunately, cameras were not rolling during this auction.  Still, this story got me thinking: Who knows where rare treasures are hiding?

In my attic, I found the following bag: 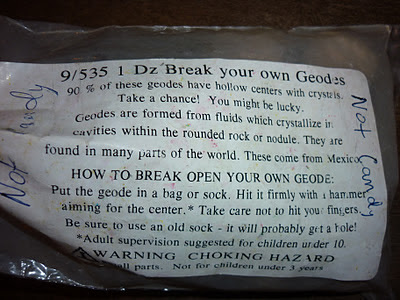 I knew from the handwriting on the bag that this wasn’t candy, so I didn’t try to eat one of the geodes.  I was very excited to crack open one of the little rocks to find the crystals inside! 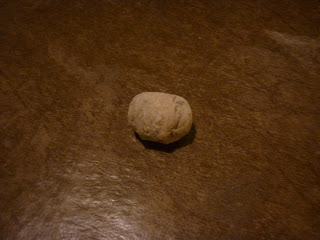 Before they're cracked open, geodes look like bonbons (or normal rocks).

I was so excited to open up one of the geodes and find the crystals that I didn't read any of the instructions about putting the geodes in a sock.  I also couldn't find a hammer.


Unfortunately, the first geode I smashed open was one of the 10% of geodes that don't have any crystals.  The second geode that I tried to open exploded into a million pieces since I hit it too hard with my mallet.


I tried to be more gentle with the next geode.  This did not go too well, but this geode did actually have rare crystals in it!  It was at this point that I realized that shards of flying geode could hit and damage my computer (which I was filming with).  I went and found a hammer.


I guess that's why they tell you to put the geode in a sock first.

Here's a picture of the the crystals up close: 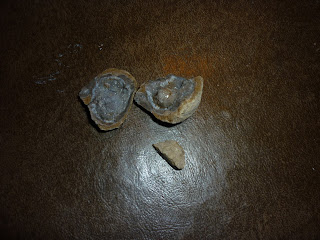 I'm going to have to get these appraised.

If anyone wants to buy one of these rare geodes from the mountains of Mexico, let me know (I have five left).  I will not sell them to you if you are a child though since I do not think opening them is very safe (even for an adult like me).

Good luck finding your own treasures, everyone!
Posted by Jeff at 12:25 AM