There are four requirements you have to meet in order to be on this list.  You must be:

I didn’t say making the Top 10 Coolest Talking Movie Dogs list was going to be easy!  Without further ado, here are the ten most awesome linguistically-gifted canines from the big screen.  (Please note: If your favorite movie talking dog didn’t make the cut, I don’t care.)


10. SCOOBY-DOO the Great Dane
Film: Scooby-Doo, 2002 version
I know what you’re thinking: “Jeffrey, you said a dog has to be cool to be on this list, not incredibly obnoxious.”  Well, I did say that.  I can’t deny it since I can just re-read what I wrote a few lines ago.  HOWEVER, I could only think of nine cool talking dogs from movies and it’s awkward to have a Top 9 list.  So I just put Scooby-Doo in the ten spot, even though he is annoying and I hate him. 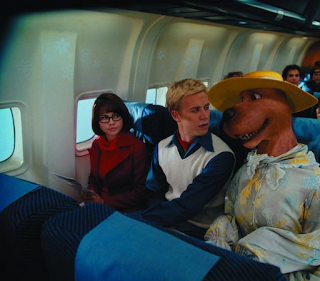 Why did I upload an image that doesn't have Scooby Doo in it?
Wait a minute... that's not a lady in a hat!

9. TRAMP the Stray Mutt
Film: Lady and the Tramp
I don’t really remember much about Tramp since I haven’t watched Lady and the Tramp in roughly one million years, but, for some reason, I just assume that Tramp is smooth and cool.  I guess he’d have to be to score a high-class dog like Lady. 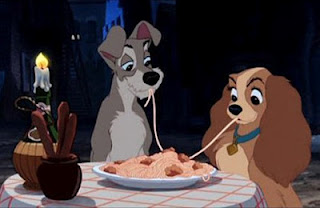 He knows what he's doing.

8. LUCKY the Dalmatian
Film: 101 Dalmatians, 1961 version
I felt like this movie needed to be represented since it has the largest cast of talking dogs.  (Not really a cast I guess; a collection of dog drawings?)  Lucky got his name because he died while being born, but then Roger Radcliffe was able to revive him.  Also, he has a red collar and he is one of the only dogs from the movie whose name I know. 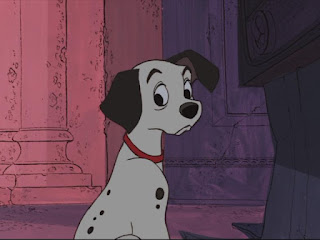 Lucky looks like he's going to be in a Tim Burton movie.

7. SLINKY DOG the Toy Dachshund Slinky Dog
Film: Toy Story (1-3)
Slinky Dog is cool because he is both a slinky and a dog.  How many of you can say that?  (Answer: ZERO!  Because slinkys are a toy and dogs cannot read!)  Slinky Dog actually saves the day at the end of the first movie when he stretches out really far between the moving-truck and the racecar with Buzz and Woody on it.  Without him, there never would’ve been two sequels. 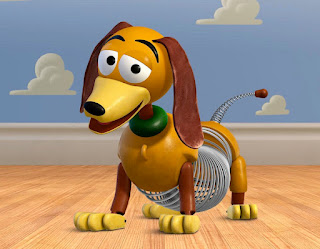 You can tell he's friendly because he is not at all scary.
Also, he is goofy-looking.

6. SAMANTHA the Mutt
Film: Dog Detectives
Dog Detectives is a TV pilot, not a movie, but isn’t television really just a movie only smaller?  (Do not answer that question.)  Samantha is hilarious, opinionated (she hates Seattle), and snarky.  Her Level 10 Dorkiness Rating (that’s actually the highest Dorkiness Rating you can get) doesn’t stop her from being the coolest dog in NYC.

5. FLY the Border Collie
Film: Babe
What sort of a dumb name for a dog is Fly?  If I was a dog and my owner named me Fly, I would bite him and poop on the floor.  Anyways, in Babe, Fly is a sheepdog who helps raise Babe, the little piglet.  She is kind and gentle and fair and without her Babe probably would’ve been eaten or beaten up by the other mean animals. 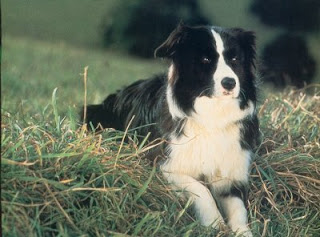 Border Collies are smarter than you.

4. FLUKE the Golden Retriever
Film: Fluke
Fluke is the story of a dog that realizes (SPOILER ALERT) he is actually the reincarnation of a human man who was a jerk and workaholic.  We see Fluke’s journey through life, as he becomes friends with Samuel L. Jackson (as another dog) and his old family.  I do not want to spoil more of the movie than I already have, but let’s just say that Fluke learns some valuable lessons in his second life. 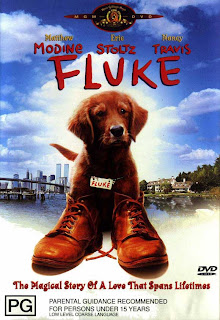 Fluke has shoes because he is a reincarnated human.

3. COPPER the Hound Dog
Film: The Fox and the Hound
Copper, the hound dog, and Tod, the fox, are friends when they are little, but then, when they grow up, they are told that they must be enemies.  But in the end, after they were enemies for a while, they are friends again and they save one another.  I am fairly certain there is a message you’re supposed to get from this movie, but it is too complex for me to understand.

2. SHADOW the Golden Retriever
Film: Homeward Bound: The Incredible Journey
Shadow is the leader of the trio of lost animals trying to make their way home in Homeward Bound.  He is wise and smart.  Many people are fans of Chance, the American Bulldog who accompanies Shadow and Sassy (the annoying cat).  However, Chance is a moron – let’s not forget that he tried to make friends with a porcupine and got quills in his muzzle! 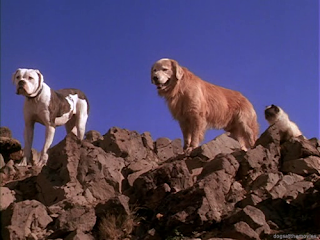 1. DUG the Golden Retriever
Film: Up
Dug can speak through a special voice box created by an evil, explorer.  Dug, however, couldn’t be nicer!  He is also hilarious because of his lack of intelligence.  Actually, is it just me, or does everyone in Up seem to be mentally challenged?  There’s the boy – Russell, the bird – Kevin, and, of course, Dug.  You can’t blame that old man for being so short-tempered! 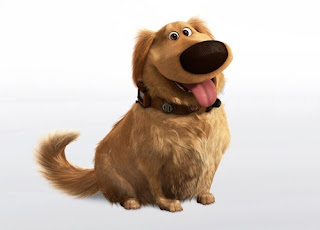 As the great Porky Pig once said, "Th-th-th-that's all folks!"  Peace!